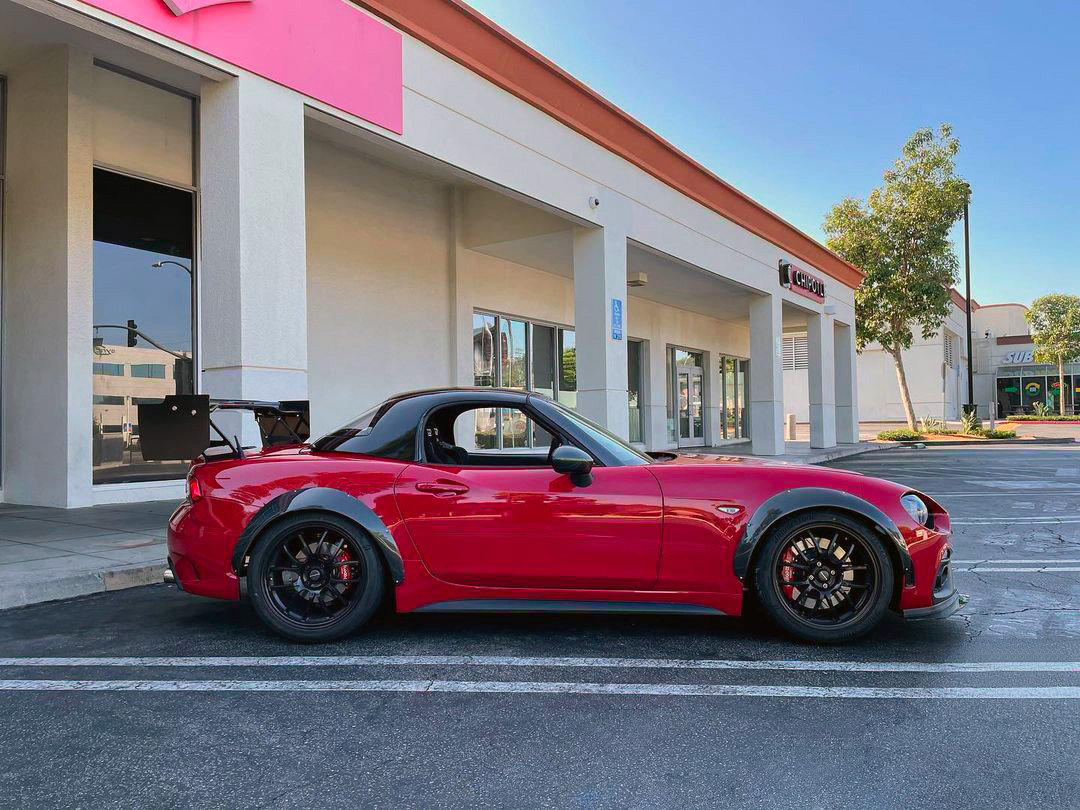 A sport car that gives you ultimate driving enjoyment at the race track doesn’t necessarily have to produce insane horsepowers. In fact, it should have a combination of qualities twisted together in a certain proportion to be called a proper “sports” car, just like this red Abarth 124 roadster that we’re about to review today!

Before diving into the specs of this caged track-ready roadster, let’s talk a little bit about the background of this model. 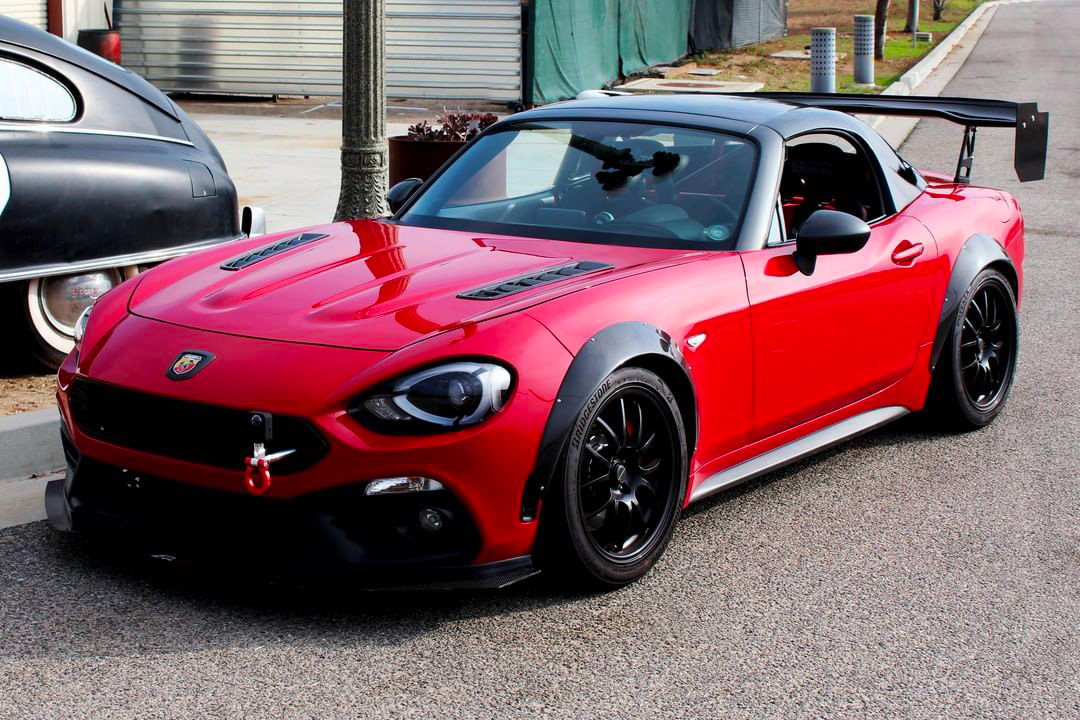 In the second part of the XX century, British racing fans and enthusiasts realized that there is a certain golden ratio of power to weight that works best at the track and on twisty country roads, which soon brought them to the idea that light and nimble cars with small displacement engines can bring just as much fun behind the wheel as the more expensive V8 and V12 supercars. 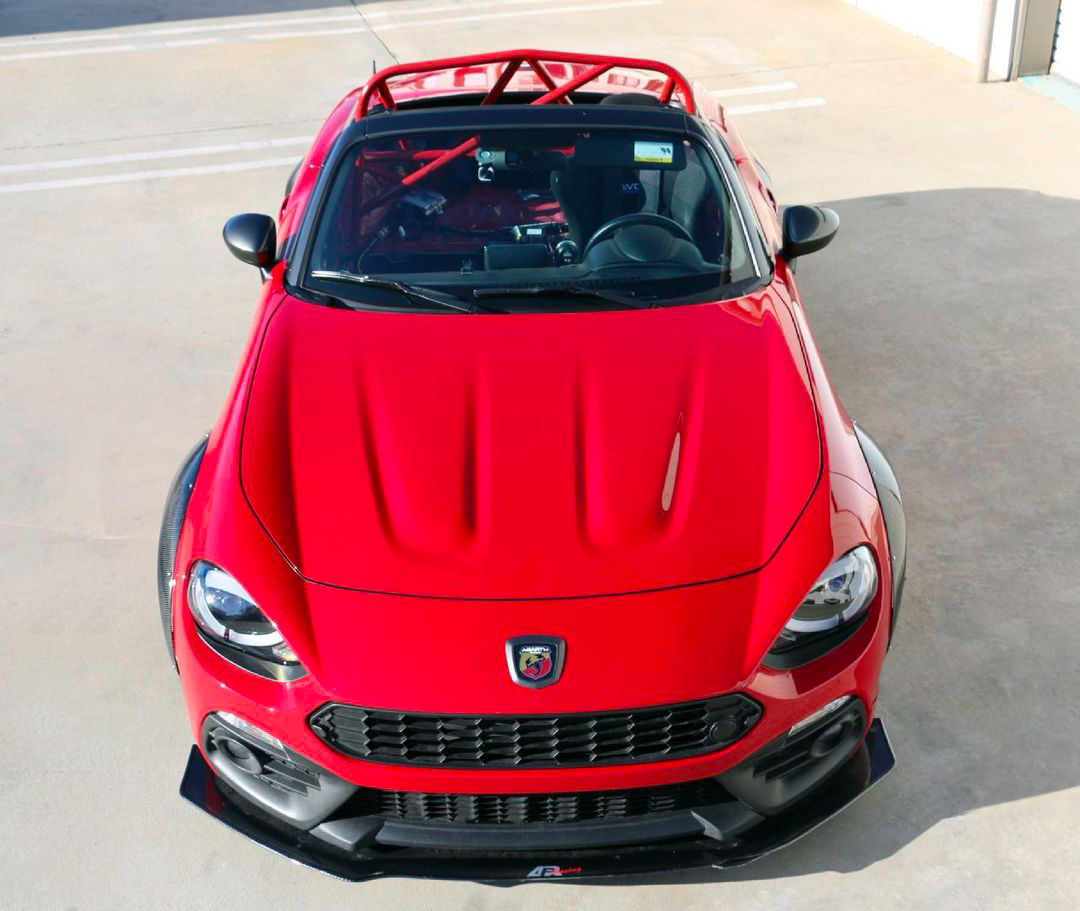 The key qualities of such cars were lightness, perfect weight distribution, precise handling, and rear-wheel-drive layout. Little by little, the brands such as Austin-Healey, MG, Triumph, and others have popularized the new image of compact sports cars, which quickly gained popularity among motoring enthusiasts around the world and changed the direction of the entire industry.

“The key qualities of such cars were lightness, perfect weight distribution, precise handling” 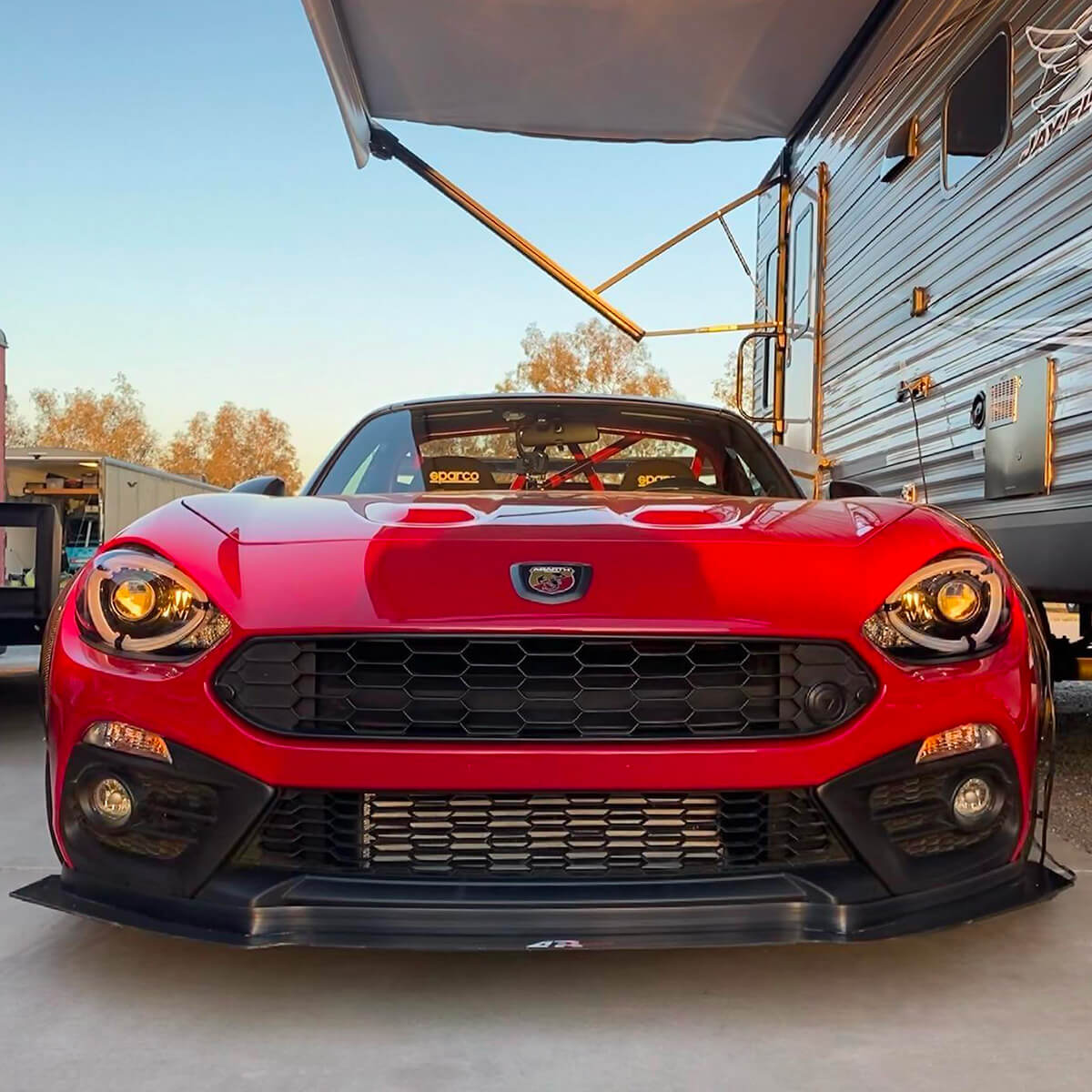 In the late 60s, Fiat has launched a 124 convertible, which combined the best compact sports car traditions of that time. It was a rear-wheel-drive roadster with a sporty appearance and appealing design. For almost 20 years of production, it became incredibly popular in Europe and gained notable results in autosport.

The modern generation of the 124 Roadster is sharing the chassis and other components (except for the engine) with the Mazda MX5 Miata ND, which in essence is the modern reincarnation of the same idea. 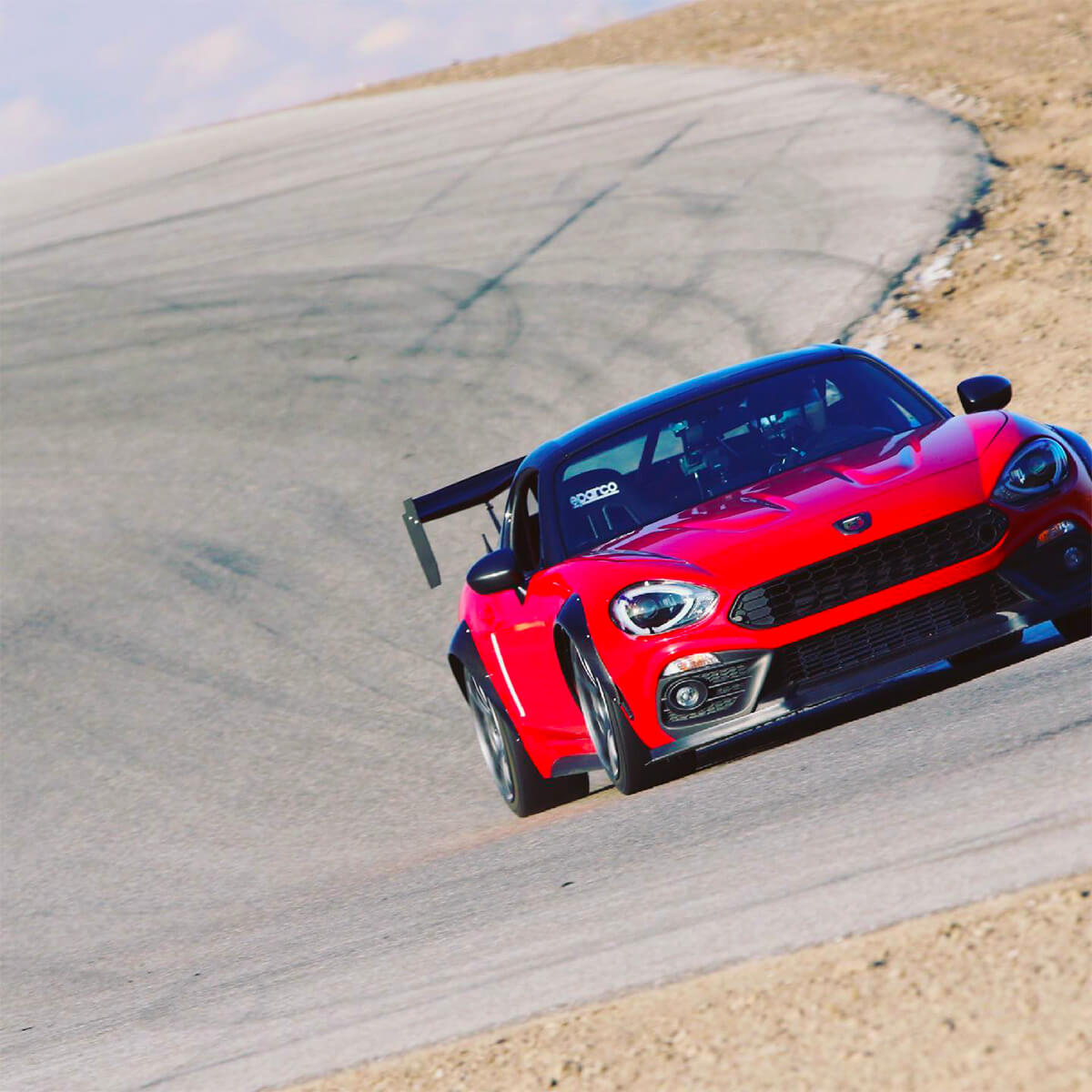 The owner of this beautiful Abart 124 enjoys the sporty nature of this car and uses it as his track toy, that’s why, the majority of modifications are made to bump up the performance, handling, and safety, rather than just the looks.

The car has got that wide functional stance to improve the cornering and handling. It sits low on a set of Ohlin custom long-stroke coilovers with 11k front, 6k rear, and 17” Forged Titan 7 Wheels wrapped in wide 275 Toyo Proxes RR tires. Rear arms and links as well as the front camber arms are developed by @phase2motortrend. 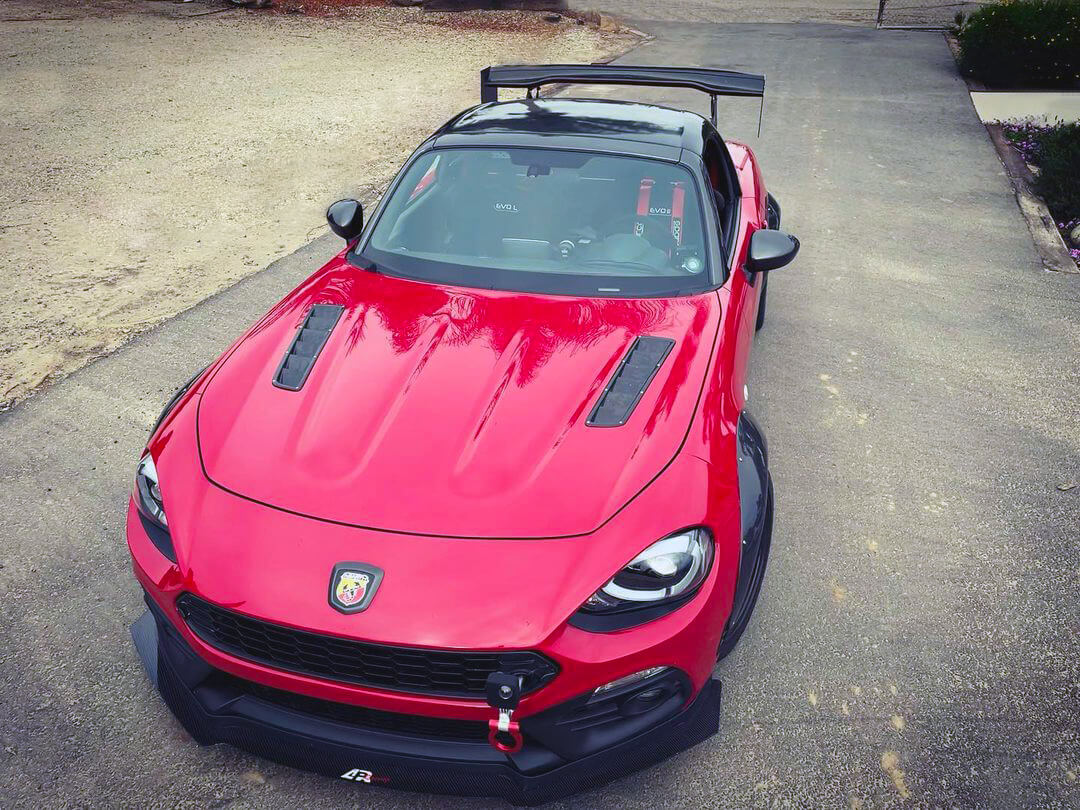 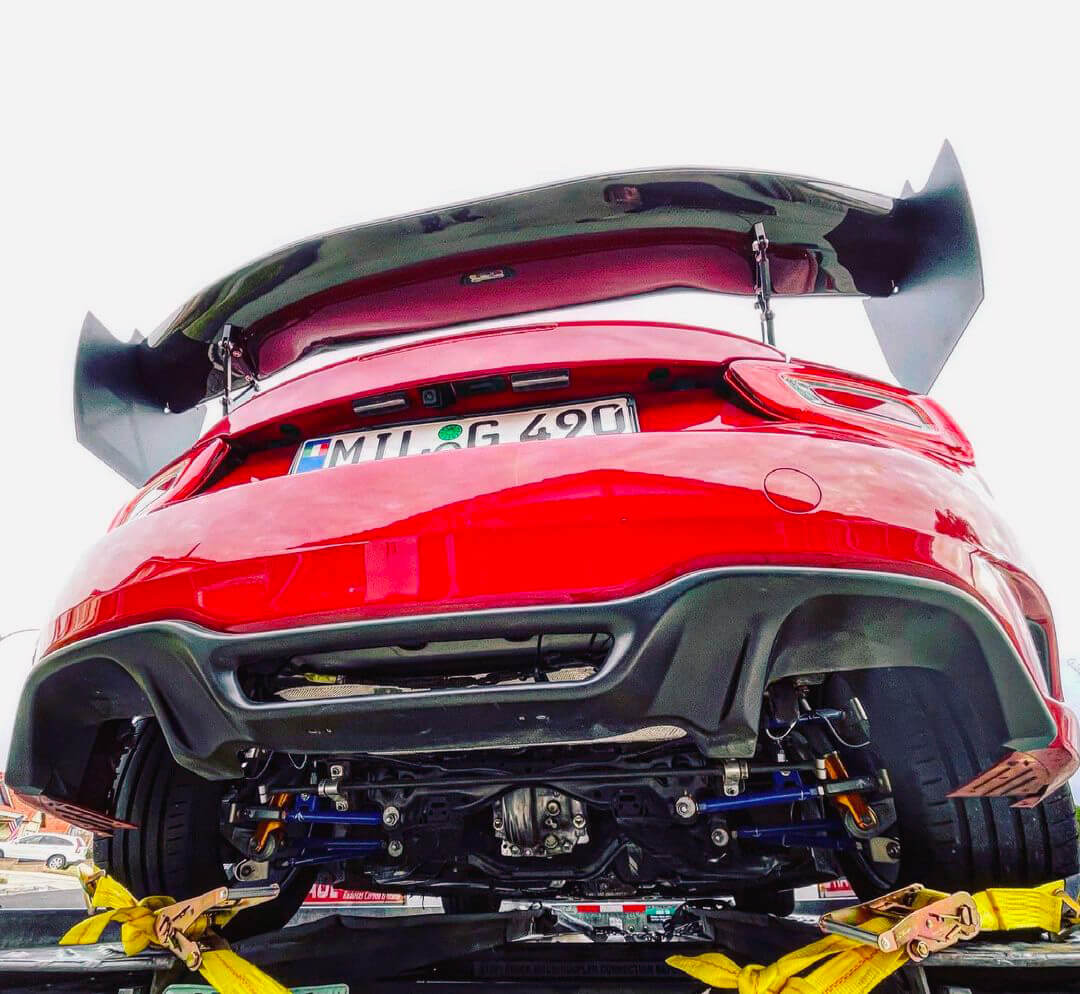 Among the exterior upgrades are the half cage, custom welded to fit to the roofline of a CCP Fabrication hardtop, APR performance aero, Miata Carbon fiber fender flares, Kaze Space Engineering spoiler, and other. Thanks to the unification with MX5 Miata models, some exterior parts are interchangeable.

Performance-wise the car has been through various stages with the latest setup featuring a stock 1.4L Multijet engine with a stuffed turbo, E85 tune, and other upgrades by Euro compulsion. 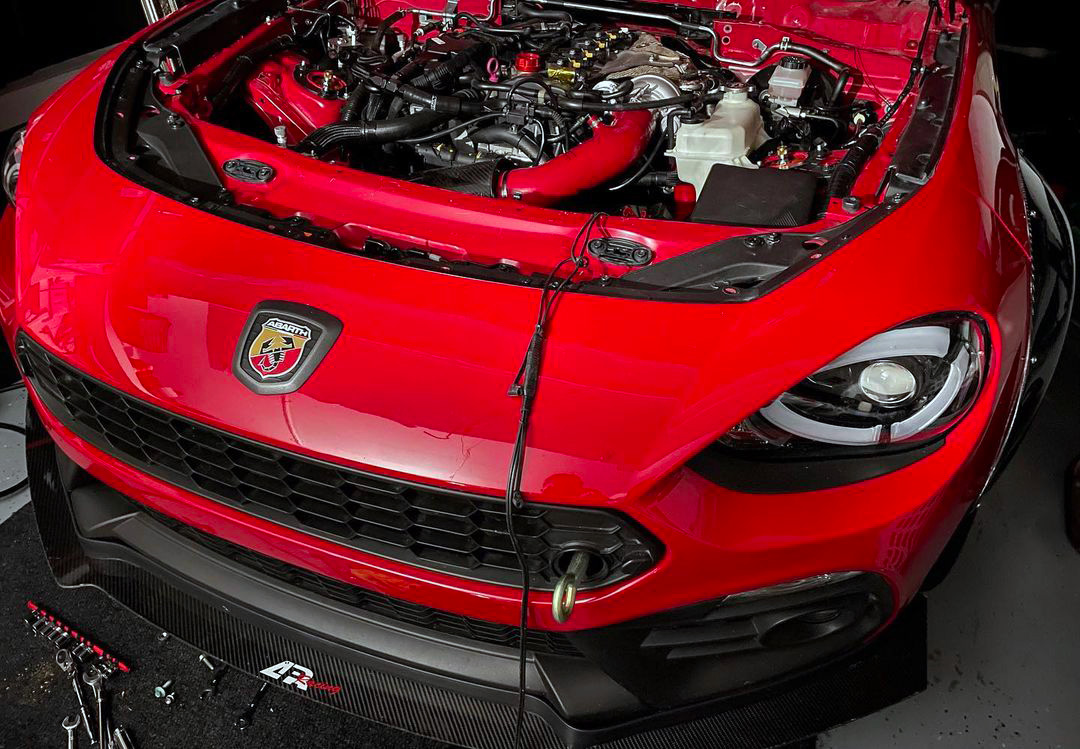 To drive the performance gains further, the owner decided to swap the stock engine with a famous K24 turbocharged motor by Honda, which is known for truly massive performance potential. 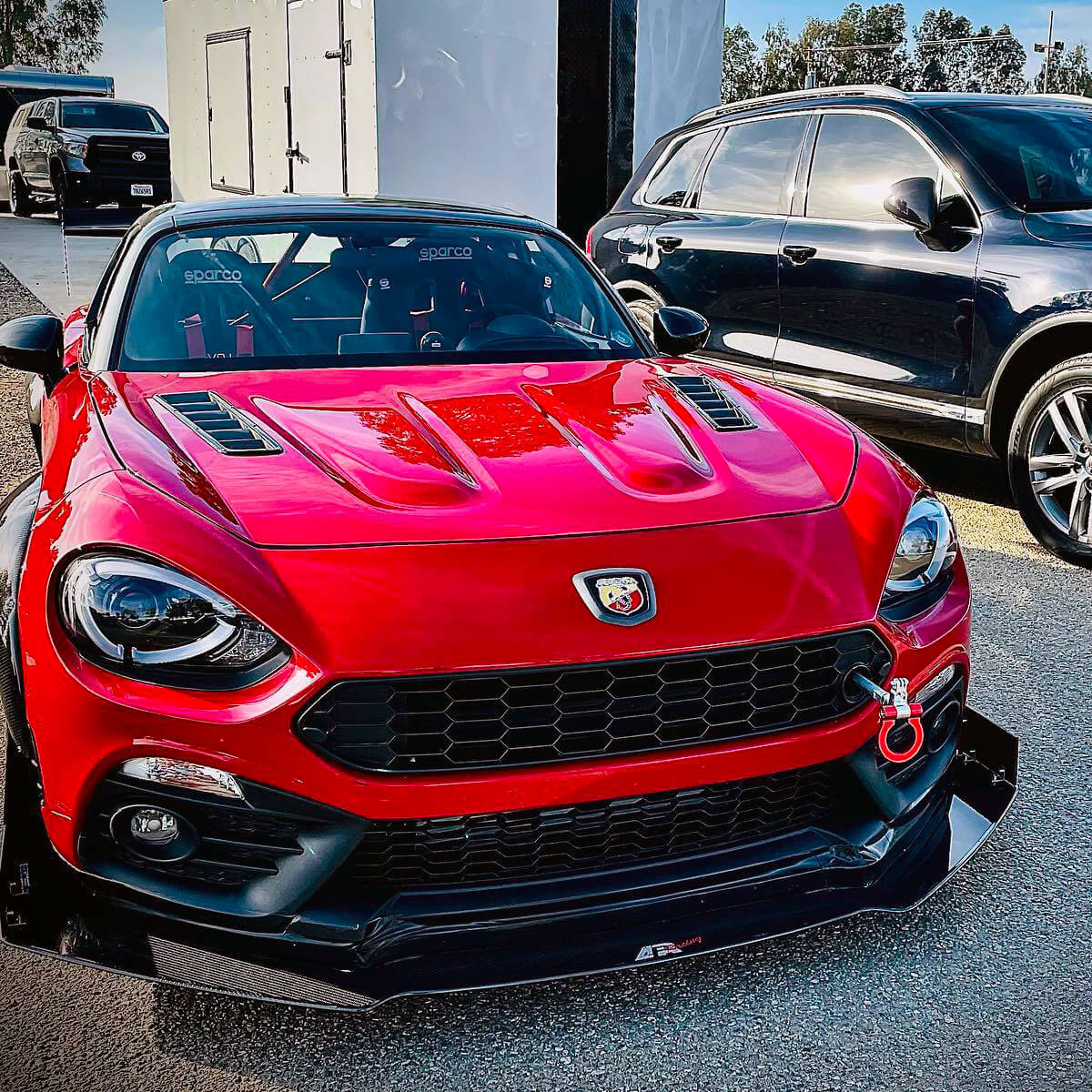 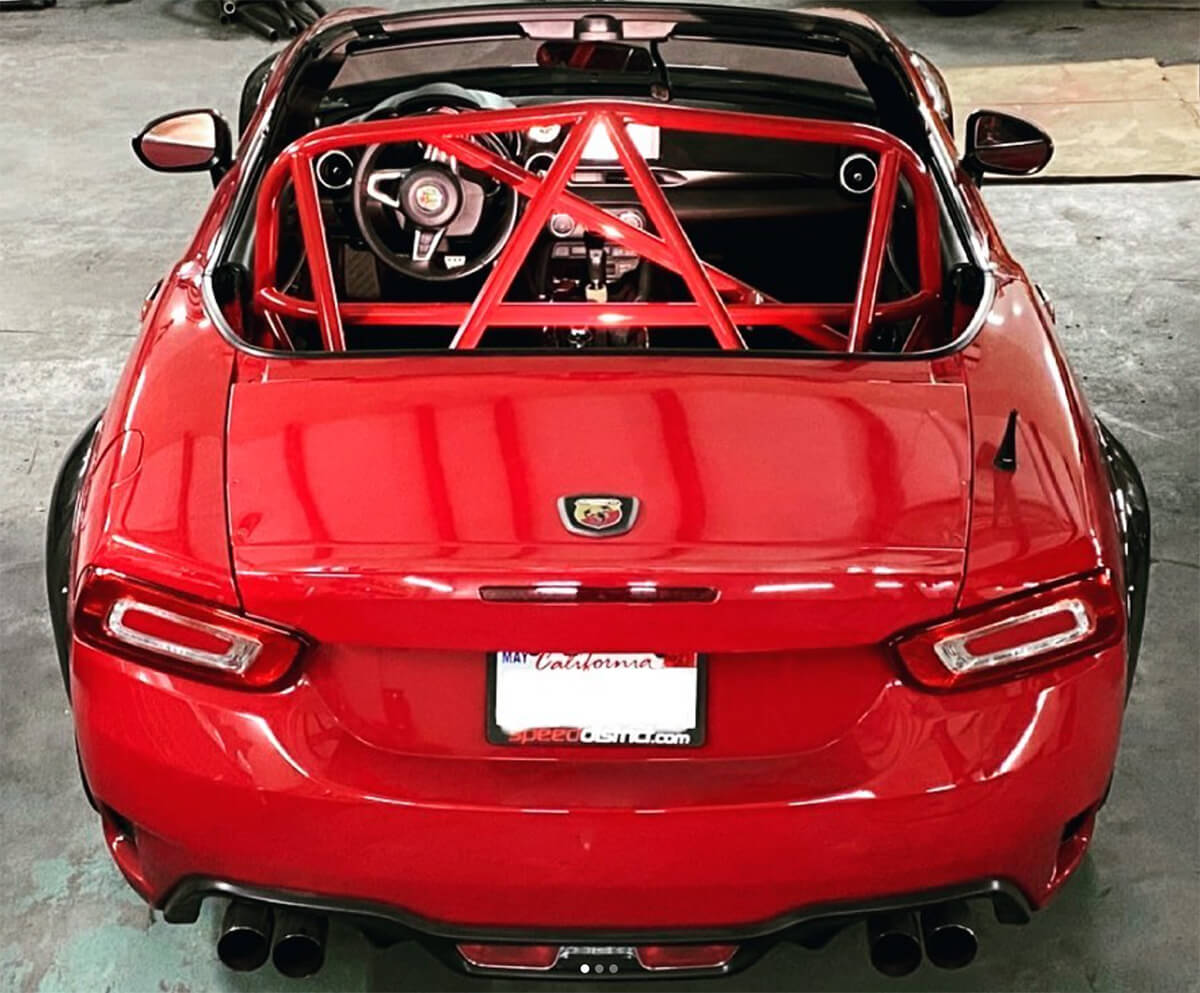 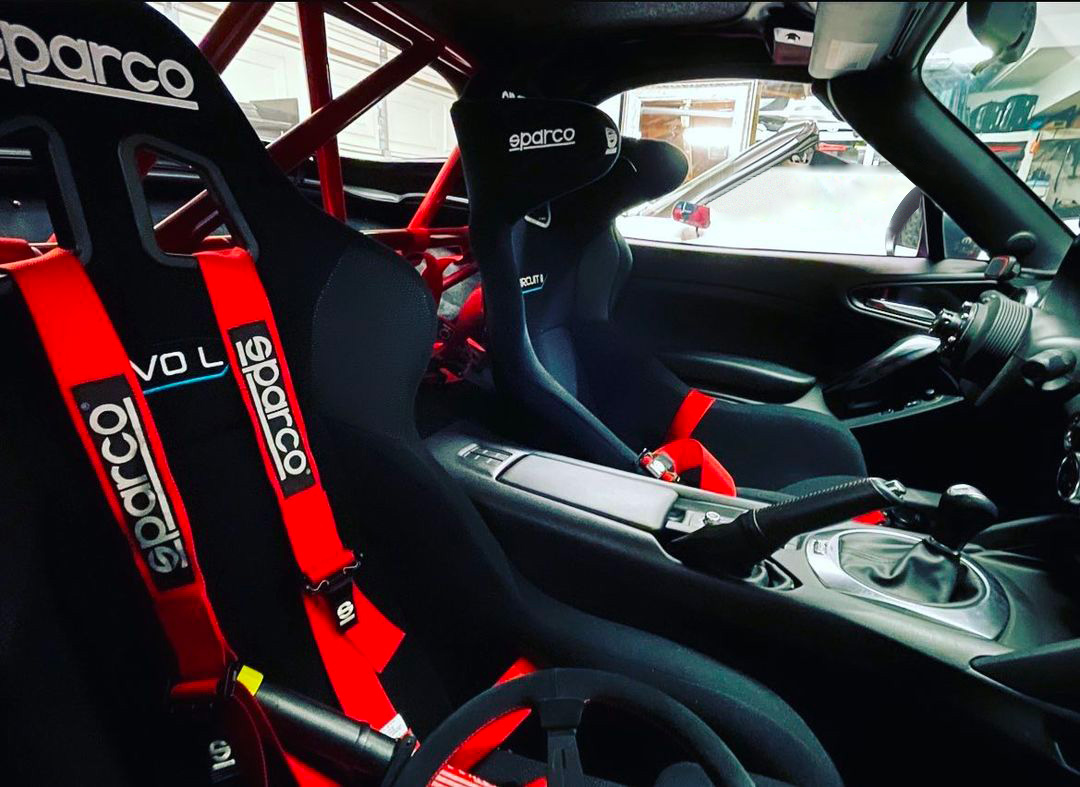 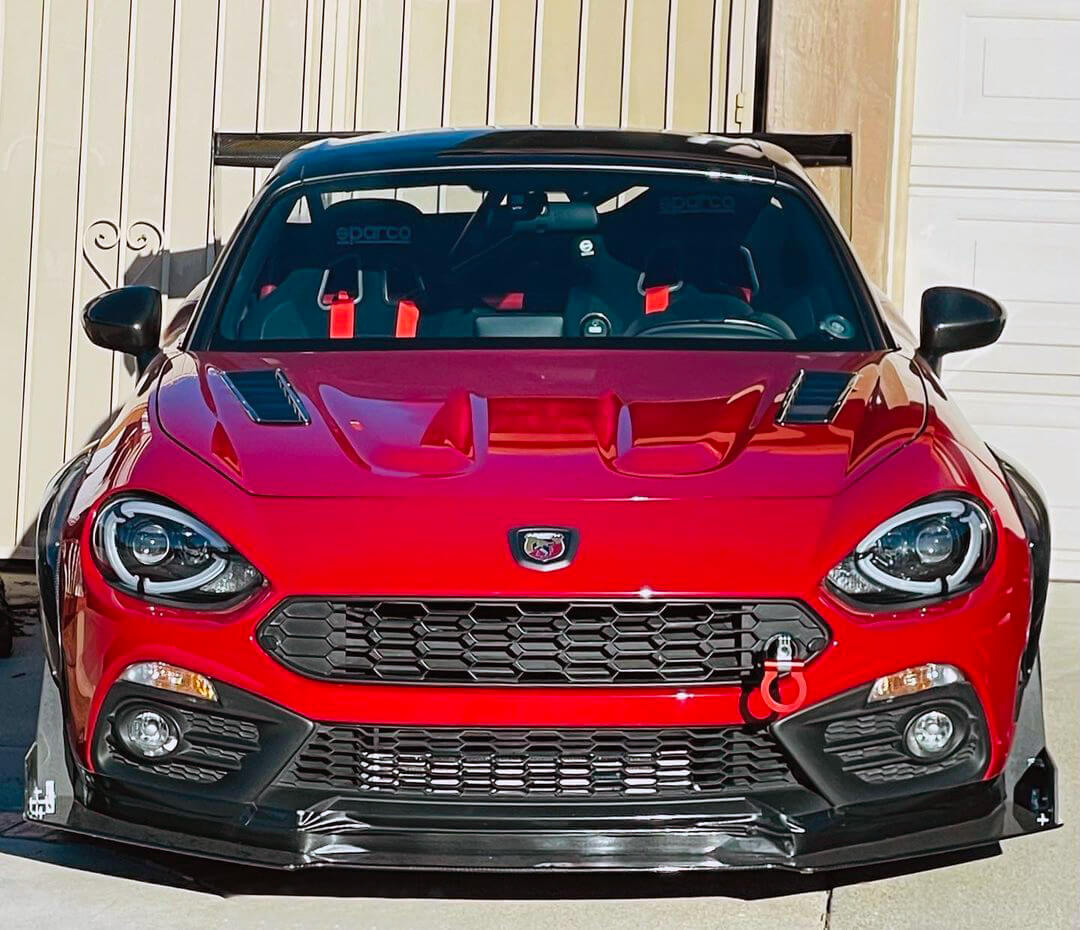 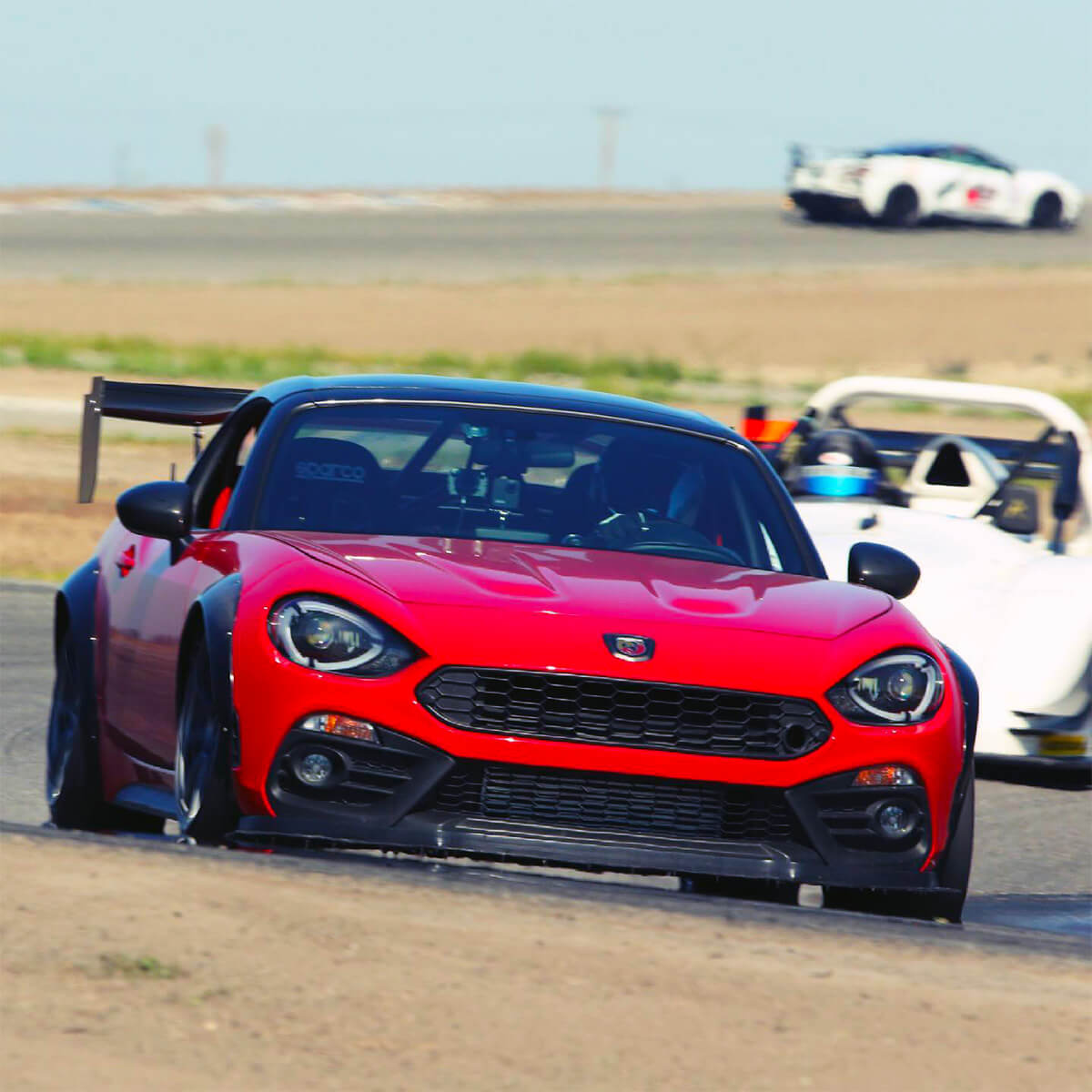 Watch the progress and find out more about this Fiat 124 Spider project by visiting the Instagram profile of the owner: @124_abarth!