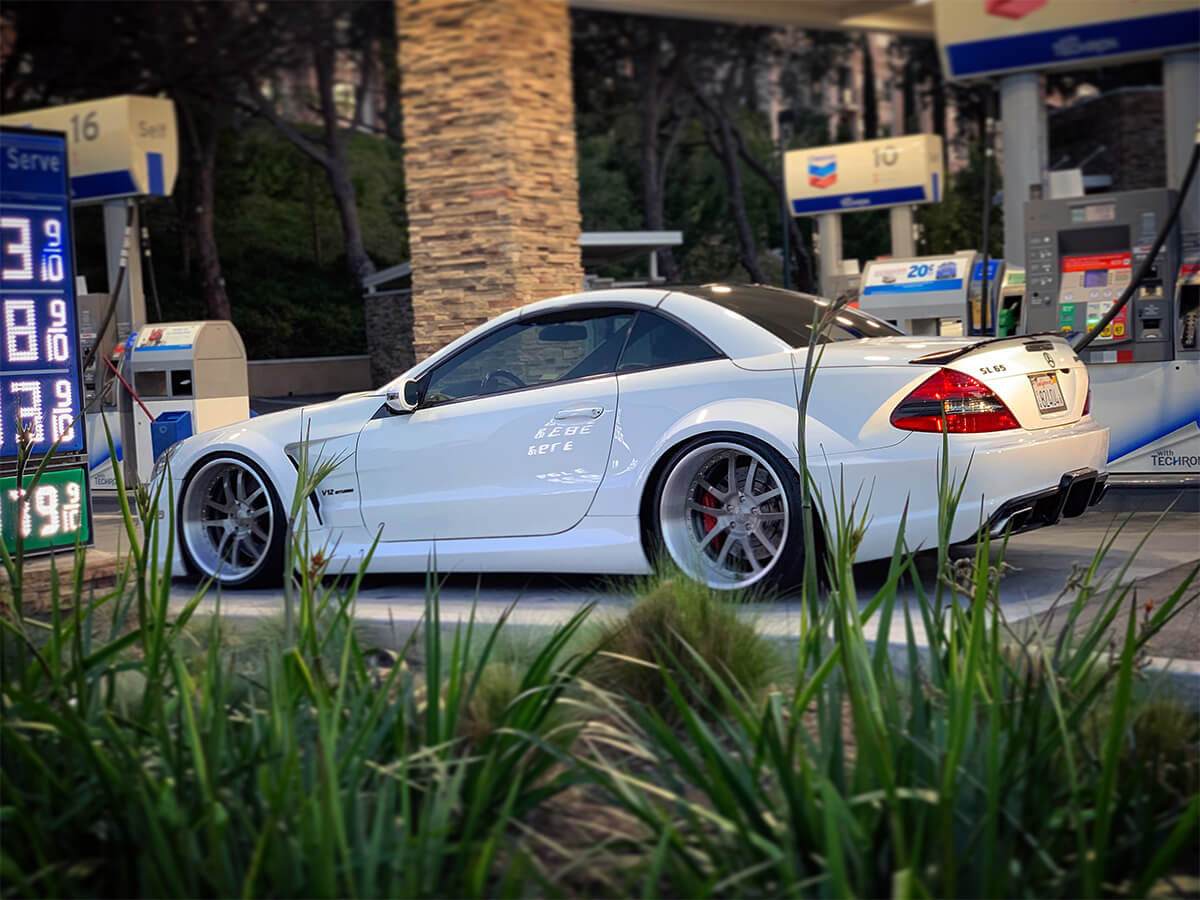 Mercedes-Benz unveiled its 2-door grand tourer, the SL-Class back in 1954. The model became an instant hit, as it not only was the fastest production vehicle of the time, built on the actual race car introduced 2 years before and capable of reaching 163 mph, but also came with gullwing doors – an outstanding novelty for the mid-1950s. 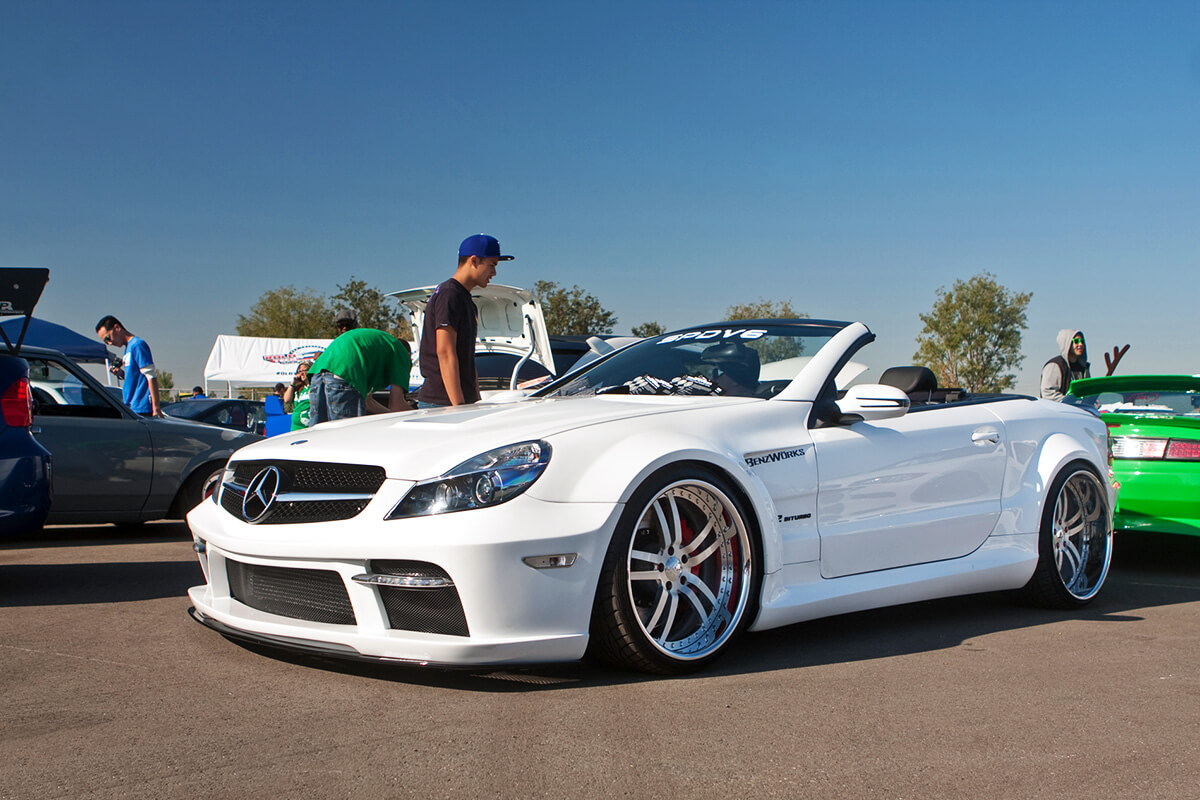 Years after years and decades after decades, engineers at Mercedes-Benz improved the vehicle successfully, so that it retains its popularity even today, after more than 55 years of run. As of now, the SL-Class underwent six generations and is still in production. 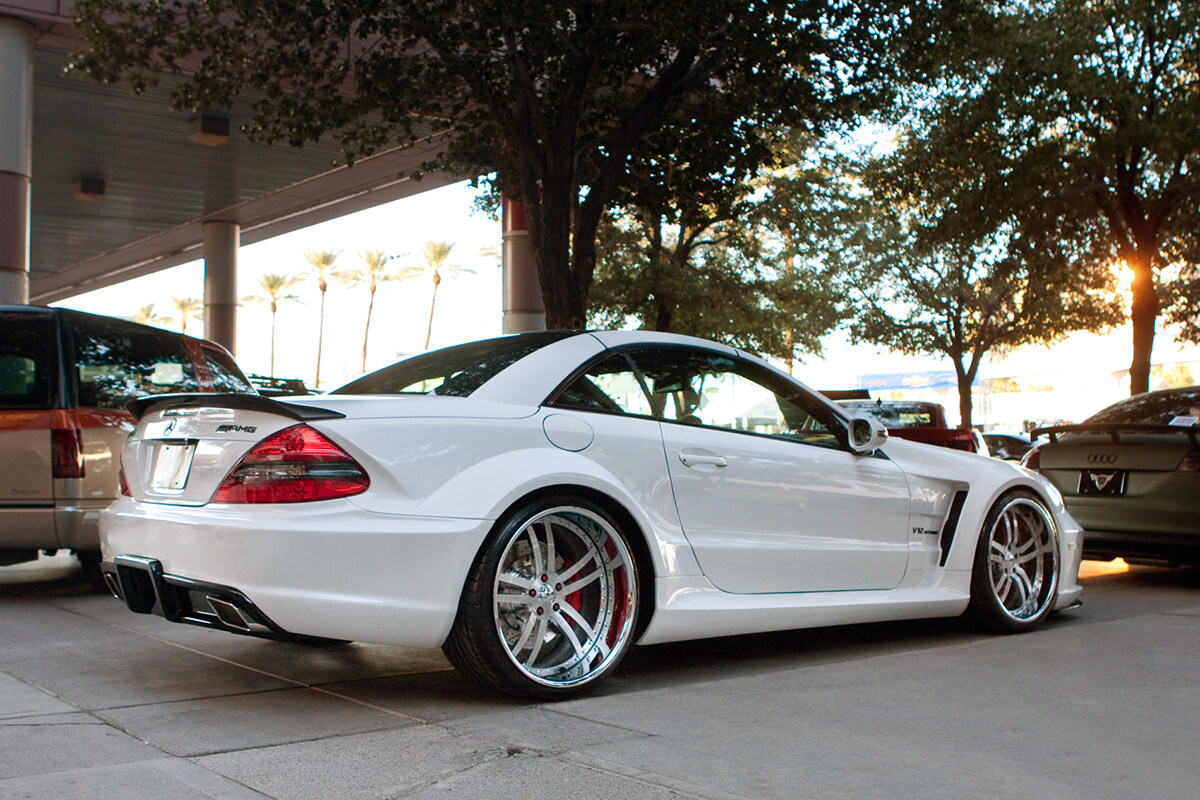 Apart from excellent performance, the model has been offering distinctive look and often came with a convertible top – specially for open-air lovers, like you and me. No wonder that the SL-Class often participated in auto shows and even was a safety car for Formula 1 racing. 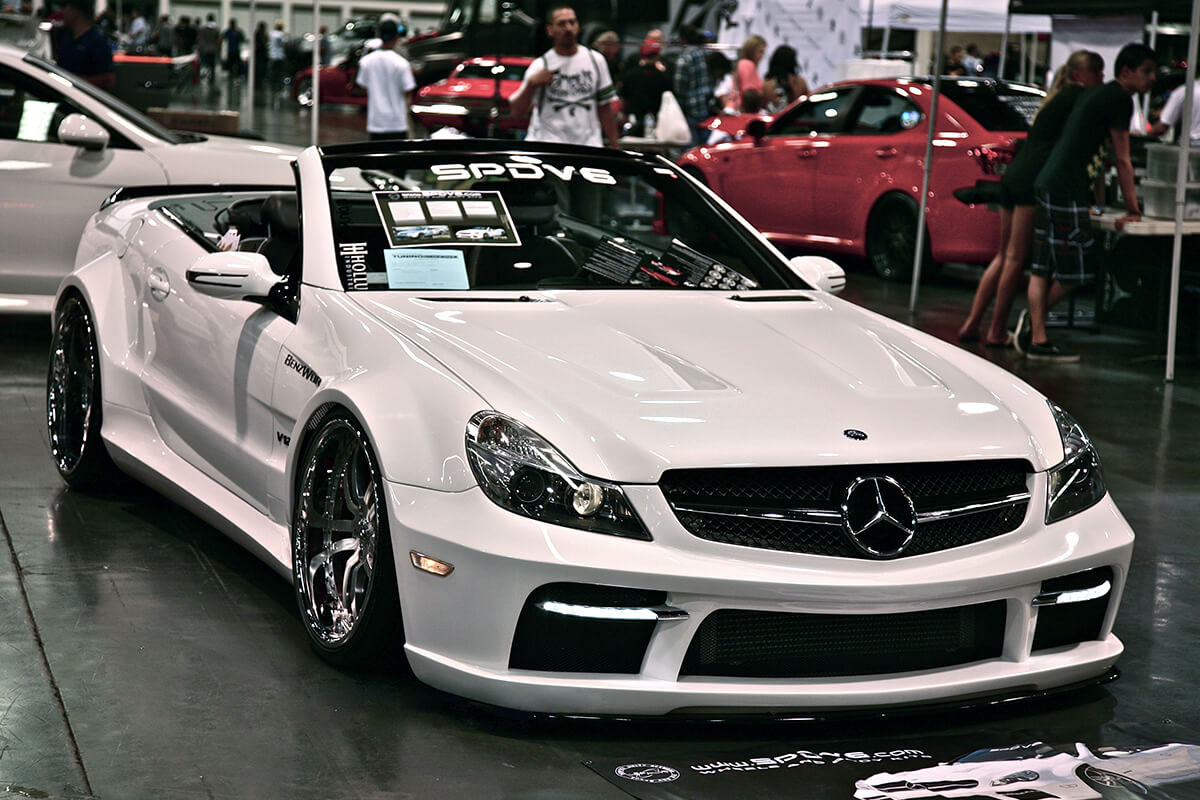 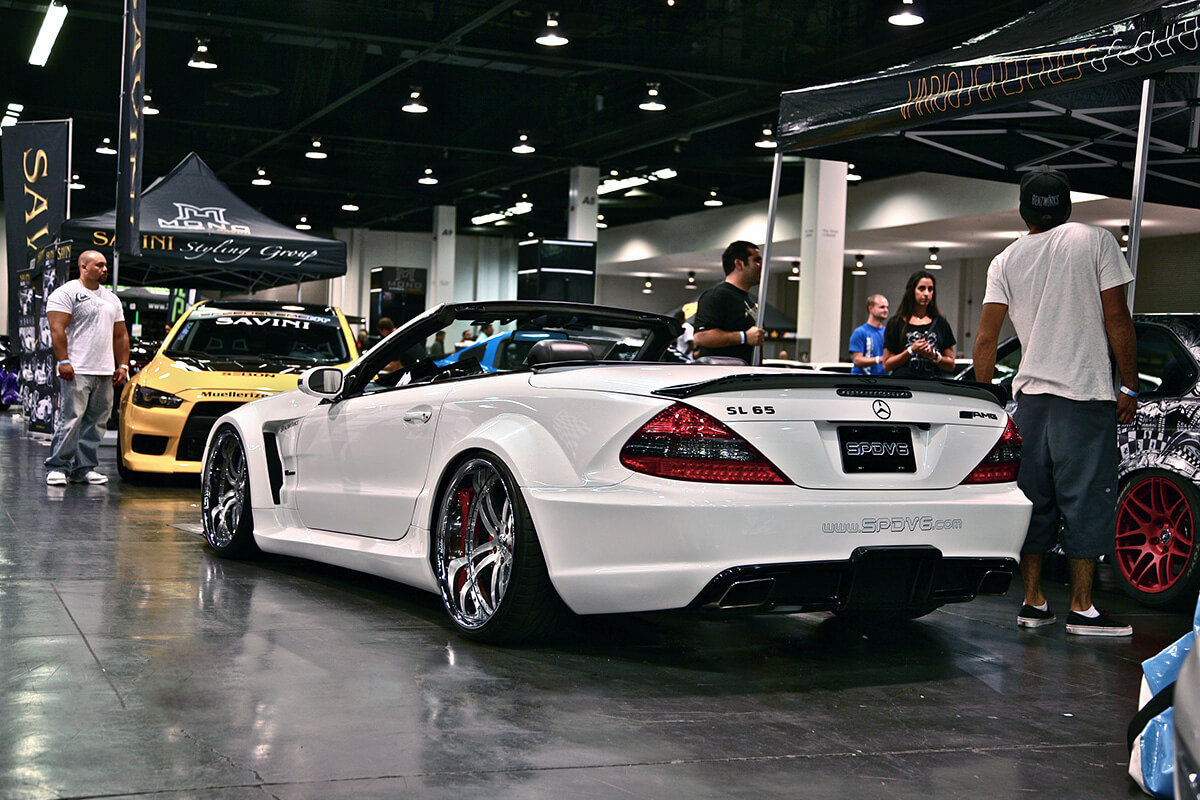 Right on this web page, you can look at one of these incredible vehicles – the 2005 Mercedes-Benz SL-Class specially modified for SEMA shows. All the upgrades were made by Samuel Programming and Design, Inc., originally it was a bone stock SL65 biturbo version that turned out to become the main focus of the company. The original idea was to take a stock car and turn it into the wide-body black series but with a folding roof, as the original black series came with hard top only. 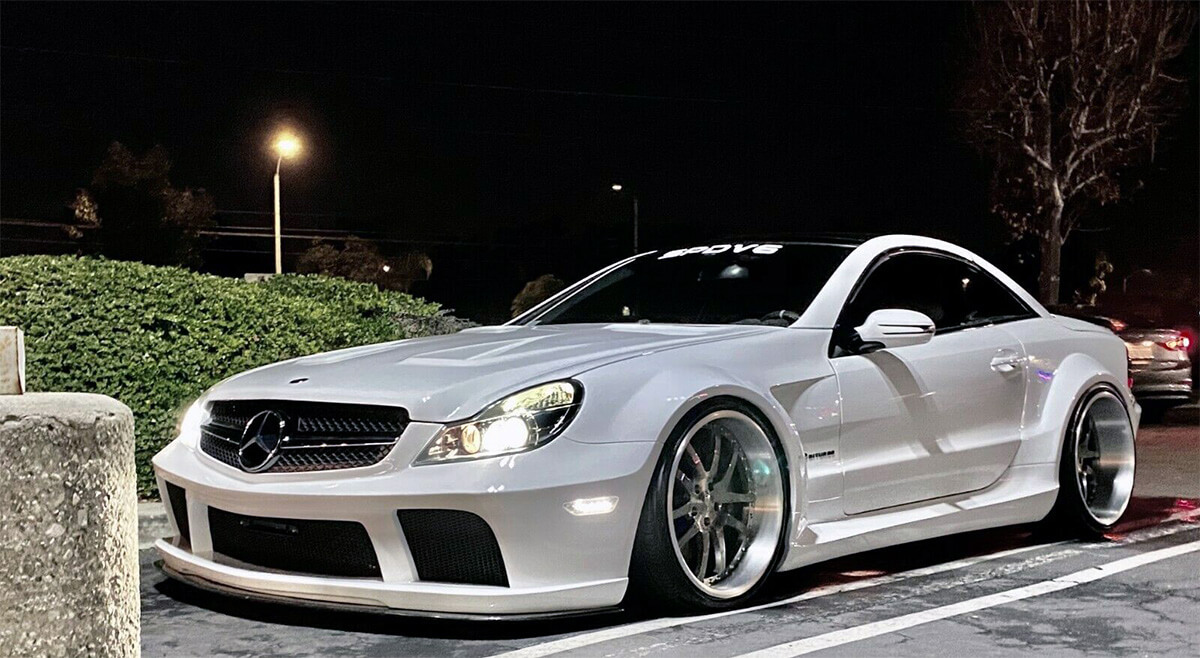 For sure, the list of upgrades and modifications made is huge. Under the hood, there is an OEM 6.0 L twin-turbo V12, but thanks to the front-mounted intercooler, ECU/TCU computer upgrade and turbo downpipes, it became even more potent and now its power output tops out at 700 hp and 850 lb-ft. The interior underwent some updates too – the swede two-tone leather is now in place of the OEM one, while a center console, steering wheel and doors feature carbon-fiber inserts. The audio system was also upgraded and now is compatible with smartphones.

Of course, the most noticeable difference from the stock model is the exterior. The car is an identical copy of the black series wide body but with a folding roof. There were lots of components installed and a lot of job done, it’s quite difficult to mention everything. This 2005 Mercedes-Benz SL-Class costs a solid amount of $95,000, but it is really one of a kind. Plus, the vehicle boasts a huge number of different titles and awards earned at numerous auto shows and like-new condition both inside and outside, so it’s definitely worth considering.